IT ALL STARTED
WITH A SOAPBOX 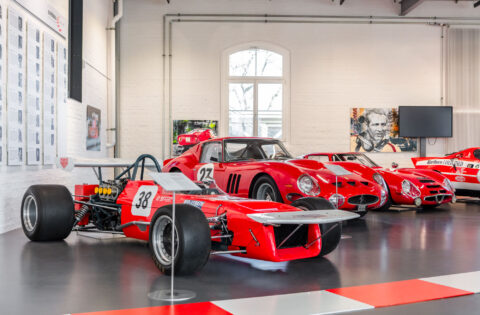 We paid Fredy Lienhard a visit at his famous car museum “Erlebniswelt Autobau” in Romanshorn to talk to him about his passion for cars – no limits or stipulations, just his experience in his own words. Fredy is a true storyteller who speaks from the heart and exudes charisma and charm, as well as the special talent to cast a spell over the listener. People are drawn to him not just for his fascinating real-life stories, but also his grounded, familiar personality. In his respectful manner, he emphasises how he always encountered the right people in his life, and indeed, Fredy’s tales are also stories of his important companions.

Fredy A. Lienhard was born in Herisau in 1947. At the age of 22, he became the head of Lista Ltd following the sudden death of his father. He went on to expand the company’s activities to make it an international leader in factory, storage and office equipment. In 2006, Fredy Lienhard sold a 75% share of Lista B+L Europe and America in order to focus on Lista Office and ensure the company remained family-owned. In 2019, the company was sold to Zhejiang Henglin Chair Industry. Alongside his career, Fredy Lienhard was always active in motorsport. He founded the Lista Racing team in 1968 and participated in Formula Vee, Formula Two and many other races. In 2007, he opened the “Erlebniswelt Autobau” on a former industrial site.

HIS RECIPE FOR SUCCESS: HARD WORK, INTELLIGENCE AND LUCK
It may sound like corny advice from a fortune cookie, but it hits the nail on the head. Fredy explained that was always the case, whether referring to his experience in business or in sport. Hard work and intelligence are usually within your control, but being in the right place at the right time – as he so often was – is simply coincidence, or some might say fate. The events of the year 1995 are a good example: Fredy launched his racing career in North America at the ISMA racing series with the Ferrari 333 SP, unveiled by Gianpiero Moretti. During an eventful race in Atlanta – at that time, several racing series took place at the same time, and risky overtaking was not uncommon – he collided with a Nissan that pulled out in front of him while trying to overtake another vehicle. Fredy hit the retaining wall, came off the track and ground to a halt at the side of the circuit. The left side of the Ferrari 333 suffered serious damage. Fredy himself was covered in red earth and dust, but otherwise unharmed. The race was abandoned. Still in shock and without saying goodbye to anyone there, he set out for the airport. In the shuttle bus at the airport, passengers were already talking about the terrible accident. He flew from Atlanta to Zurich and took the train home. There weren’t any mobile phones in those days, and Fredy made several unsuccessful attempts to reach his wife from a payphone. Everything seemed to be jinxed. In the meantime, his wife had found out about the accident and thought her husband was lying in an American hospital bed. She couldn’t believe her eyes when Fredy rang the doorbell. 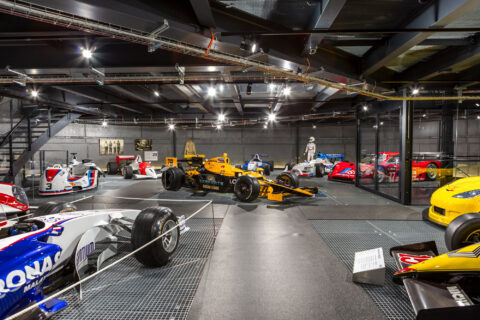 His severely damaged car could also count itself lucky, as Ferrari provided all of the necessary replacement parts straight away. The show could go on! Working day and night, a team of technicians managed to complete the repairs in just four weeks. In the end, Fredy’s team were able to take part in the rest of the race series in America.

LIFE IS A RACETRACK
In 2009, Fredy opened the “Erlebniswelt Autobau” car museum on a former industrial site. It is a showcase for his individually curated, dynamic collection of more than 100 cars. His son now curates the exhibition, but Fredy still loves to conduct tours for classes of schoolchildren and regularly takes his cars out on international track days. Fredy’s passion for motorsport is obvious throughout the exhibition, which enables visitors to experience the nostalgic cult of motorsport up close. Milestones from Fredy’s own life give structure to the exhibition, starting with the 10th birthday present from his father in 1957: the wheels for his first soapbox car, which laid the foundations for his career as a racing driver.

Representing another phase in his life, you can see the 1968 Horag HAS 3 Formula Vee, which Fredy constructed together with Markus Hotz, Bruno Wettstein and Oscar Pfister to found the Lista Racing team. Another milestone is Fredy’s first Ferrari 333, given to him personally by Piero Ferrari. He drove this car to victory in the 2002 24 Hours of Daytona race as part of a team with Didier Theys, Mauro Baldi and Max Papis. Each car tells the story of Fredy’s 40 years of participation in motorsport races from various racing series. Formula Vee, Super Vee, F2, F3000, GT: they are all there, as well as the sport prototypes Horag CanAm, Ferrari 333 SP, Dallara-Judd, the Doran-Daytona prototype, Lola B40 and Porsche RS Spyder. Challenging races, team spirit, passion: Fredy is convinced that his consistent training as a racing driver has also contributed to his successes in both business and personal life. He wants to inspire this enthusiasm in the next generation, which is why he supports Swiss motorsport.

PRIVATE RETREAT
After the tour, Fredy Lienhard invited us to his private annexe located in the old industrial building. This is where he meets friends, family or sometimes famous guests. It is a familiar space, closely connected to Fredy as a person and much more personal and intimate than the exhibition hall. The room is decorated with books, photos and souvenirs. Fredy pointed out several objects and told us some anecdotes about them, mostly relating to people who accompanied him on his journey. We also discovered photos taken when Toyota’s Administrative Board President visited the Autobau, which paved the way for friendship. Fredy will soon return the visit and travel to Japan. In this old building, it seems as though time has stood still. We ate, drank and regaled each other with stories in the cosy surroundings. Fredy’s son joined us, bringing his father a key so he can test drive the latest acquisition for the collection – a 7-metre long American Cadillac. As we said goodbye, we watched Fredy get into the gigantic convertible, smiling and full of enthusiasm, against a backdrop of sunshine. The perfect snapshot to finish off: Fredy Lienhard enjoying the need for speed. 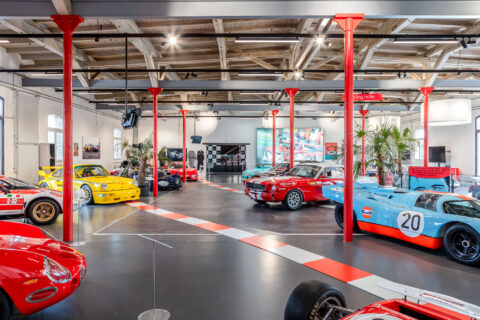