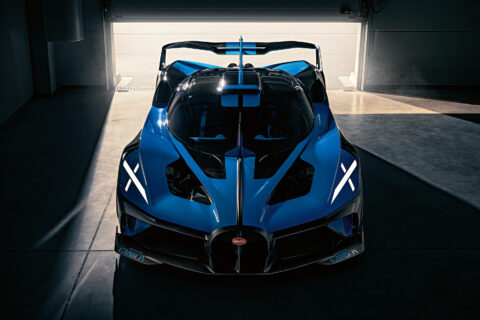 From the inside out – that’s Bugatti. The interior – the 16 cylinder engine: long-since revered as the ultimate work of art, there is precious little leeway for any other wild and wonderful innovations…or at least this was our naïve assumption – until, that is, this Bugatti Bolide pulled up in front of us. Yes, friends, this is how consistent one has to be when paying homage to an engine. In discussion with Bugatti’s Director of Design, Achim -Anscheidt: as always a great pleasure.

B.I. Collection: It would be no exaggeration to claim of this Bugatti Bolide, that it is, quite simply, sheer madness! From the point of view of the designer, how much pleasure lies in such a realisation?

Achim Anscheidt: Before waxing lyrical about stylistic features and characteristics, the essential task is first of all to listen; to fully grasp exactly what a car like this is all about. Only then do we respond. This is my responsibility and the standards I demand of my team. In contrast to the arts, design must invariably be seen from the vantage point of function. The same cannot be said of a work of art, namely, as a functionless and unique object. As a rule, objects of design – and here I’m thinking beyond the car – are not intended as objects of pure aesthetic contemplation. In this case, aesthetics and function are differently correlated than they are in the work of art.

BIC: Yet the relation between art and the car is nowhere more pronounced than it is with Bugatti.

AA: This is true. But to assume that the brushstroke defines the company inasmuch as the concept of art is anchored in the Bugatti brand would be wrong. This is the common assumption, but it is not the case. One hundred years ago, as is no less the case today, the engine remains the absolute USP of this brand. I could hold as many design presentations as I like – but the fact remains that if it wasn’t for this engine we wouldn’t be here today. By the same token, this is the very essence of the Bolide project, knowing full well – I have been with Bugatti for the last sixteen years – that that our work has always revolved around this engine. In the case of the Bolide, we have taken this to the extreme, since it was a unique opportunity to allow this engine free reign.

AA: No brushstroke. And neither is it determined by some aesthetic ideal. Instead, we have an artist capable and willing to listen; an artist who, above all else, wishes to grasp the sheer potency of this idea, and to realise his art on this basis. Herein lays the excellence of the Bugatti design: the comprehension of technical correlations and, ultimately, the transformation of these into masterpieces of art. Neither should one fear that technicians assume responsibility for a project, and that designers have little if any say in the matter. On the contrary, one must first tease 110 percent out of the technicians before seeing how one might create a stylistically superlative work of art in terms of design and brand perception.

BIC: What kind of challenges did you face?

AA: The most important thing is to understand that the core aerodynamic structure of the project is entirely different from that of a Bugatti Chiron. We made several compromises with the Chiron to create this interestingly ambivalent version of the ultimate Gran Turismo. Driving the Chiron from Stuttgart to Rome, for example, is a pleasure. Here, however, we found ourselves for the first time in a position to aim uncompromisingly at pure functionality. This was, without a doubt, the greatest challenge, and I must confess it would at times leave me gasping for air.

BIC: Would you elaborate further on this?

AA: Consider, for instance, the very open design of the front end: much like a Swiss cheese, it consists of little else than holes. Yet every square centimetre is defined by its function. And they perform a very different function than they do in the Chiron: Not one single air intake serves the same task as it does on the Chiron. They lead into other ducts, either to ventilate special radiators, to flow around the monocoque in another way, or to feed the intercoolers to the rear of the monocoque. This is remarkable in -itself: and combined with this X-graphic, which is very opulent and quite literally leaps out at you, it -underscores the spirit of this experiment.

BIC: And what of the name Bolide?

AA: Just between ourselves, we initially favoured the name “X-16” – Experiment with a W-Sixteen–Engine. However, Stephan Winkelmann felt that this had an overly military echo and was too brusque. He prefers simple and distinctive names, such as the Murciélago, Aventador, Huracán and Gallardo, which I can well understand. And, as he freely admits: “I like real names.” So we settled for Bolide.

BIC: So we should better not mention this?

BIC: At any rate, it rather neatly conveys Stephan -Winkelmann’s ideas.

AA: And feel free to write this. I have no issue with it. What Stephan Winkelmann made possible for Lamborghini, and will now surely make possible once again, is impressive. Besides, I am entirely indebted to him for all the things he made possible for me at Bugatti: Divo, La Voiture Noire, Centodieci, now the Bolide, plus the Pure Sport and the Super Sport 300+ derivatives of the Chiron, are all directly attri-butable to him.

AA: And we approach the whole venture very methodi-cally. When Stephan Winkelmann came over to us in 2017, we presented everything once, even some of the names – Divo, La Voiture Noire – already agreed upon at that time. The others we developed over the course of the process. Besides the models, we decided to highlight the motor shows, especially in Geneva and Pebble Beach. We carried out this plan over the past few years – and up to nearly 90 per cent of it. We pursued a pretty radical and consis-tent course of action.

BIC: Just how great is the danger of overdoing things here?

AA: coachbuilding was, of course, something that enjoyed a renaissance at Bugatti. But I believe that one must play with balance and proportion. We are quite well aware of this. At some point, if all you offer is coachbuilding things are bound to become somewhat routine; it is no longer something special and holds little if any special value in our clients’ collections.

BIC: In light of the current developments surrounding the car as such and perhaps its significance in general, do you think the future holds much scope for such ideas? Or will there be a place for them precisely because of this?

AA: In view of the current stage of technological -development, I personally find it interesting that Bugatti is involved in some kind of development and thinking in and around this issue. On the other hand, I also believe that in endeavouring not to lose sight of Bugatti clients there is a respect for what our collectors see as a value in their collection. And this might well be the last superlative internal combustion engine, or an internal combustion engine combined with some type of hybrid. And, as we all remember well: back in the mid-1970s, when the quartz watch made its appearance everyone asked who will need mechanical watches in the future? Essentially, this amounted to the starting shot for the success of mechanical watches, and brands such as Patek Philippe or Rolex. Such trends are also witnessed in the automobile industry. People will always appreciate the value of these mechanical gems.

BIC: To think what no one else dares think?

AA: In a way – the “what if” question: There will always be people who value precisely that. This is not an appeal to die-hards, but rather an appreciation for those who would like to introduce values into their families and can explain them two, three or four generations later: “This was State of the Art in 2020. Just look at this!”

BIC: Does the same apply to Bugatti’s young customers?

AA: Those clients very familiar with the Bugatti brand, no matter their age, understand perfectly well that engineering a fully electrified Bugatti, for example, is by no means a simple and trivial undertaking. This would be a touch too “MeToo”, to which Bugatti would never subscribe. Never! Certainly, our established clientele would never subscribe to it. But neither would our younger generation of clients, who have since become better acquainted with the Bugatti brand, because they know what makes the Bugatti brand so unique. Only those clients suddenly in a financial position to afford a Bugatti, but who have not yet engaged with the brand, might be inclined to say: “Yes, Bugatti should also issue an all-electric car with double the horsepower.” But, in my view, this is not how it works these days: Even if we were to create something with thirty per cent more efficiency than any other vehicle, it would only mean that tomorrow or the day after by the latest, everyone else would follow suit. And this is not something we aspire to.

BIC: Somewhat naively formulated, Bugatti stands for superlative luxury. What perception of luxury would you say underpins the brand?

AA: Unfortunately, the luxuriousness of the Bugatti brand is frequently associated with “exuberance” or “ostentation”. In my view this simply doesn’t wash. The luxury of the Bugatti brand is one that genuinely originates from within, from the added value of our technical excellence, which is then conveyed to the outside, including the design. This not only has something to do with the USP of the engine and the power-train, but with the approach to the way we produce cars and the degree of sophistication with which we assemble them in Molsheim. It has rather to do with the way we maintain the estate and the special rapport we establish with our clients. This is a love from within, something that the client discovers and relishes.

BIC: Twenty years from now, when looking back at this engine, what will we think?

AA: The same as holds true of the present: We bow with gratitude and respect to Ferdinand Piëch, who was bold and headstrong enough to develop such an engine independently, and not to design it as a racing car, but to create the ambivalence between “beauty and the beast”. This presupposes tremendous foresight. Any other engineer would have been carried away in the attempt to run down anything and everything on the racetrack with this leviathan of an engine. And yet Piëch said: “Come on, let’s build something entirely our own, a car with which one takes a sedate drive up to the opera with one’s wife. No roar and bluster, but with composure.” Developing these two figures, the Dr. Jekyll and Mr. Hyde in one and the same car is a feat I salute to this day, and will continue to salute in the future. 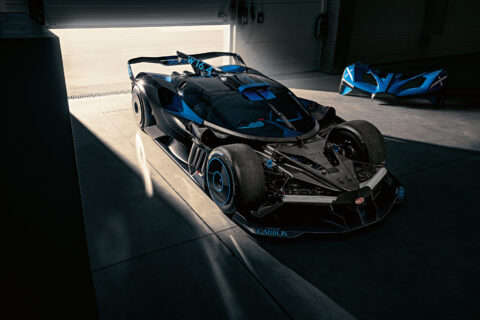