Today, four months after the announcement, the new joint company gets underway. 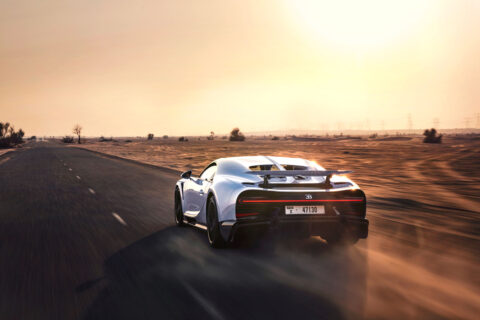 Bugatti repositions itself for the future. Today, on November 2, 2021, the “Bugatti Rimac” joint company project gets underway – only four months after the initial announcement. With it, Bugatti, Rimac and Porsche mark the beginning of a new chapter in automotive history. As shareholders, the Rimac Group holds 55 percent of the shares, while Porsche holds 45 percent. Mate Rimac, founder and CEO of Rimac Automobili, is now CEO of Bugatti Rimac, headquartered in Sveta Nedelja. Porsche AG becomes a strategic shareholder. Oliver Blume, chairman of Porsche AG, and Lutz Meschke, deputy chairman and CFO, are members of the supervisory board.

Stephan Winkelmann, President of Bugatti since January 1, 2018, will focus exclusively on his work as Chairman and CEO of Automobili Lamborghini, from November 1, 2021. He has been holding a dual position as President of both companies since December 1, 2020. “I would like to thank the entire Bugatti team and our customers for three and a half unbelievable, exciting, intense and successful years. Together, we have developed fantastic hyper sports cars and led Bugatti into a new dimension,” says Stephan Winkelmann. Under his leadership, Bugatti has redefined modern day coachbuilding with the Divo, La Voiture Noire and Centodieci models. At the same time, the team expanded the Chiron family. Though technically very different, the Chiron Pur Sport and Chiron Super Sport hyper sports cars offer the maximum spread of the “Bugatti spectrum of performance”. In addition, the Chiron Super Sport 300+ became the first production car ever to break the 300-mph barrier in the summer of 2019. Having achieved a speed of 304.773 mph (490.484 km/h), the Chiron Super Sport 300+ is since considered the fastest production car in the world. With the Bolide, Bugatti developed the most uncompromising vehicle in its history at the end of 2020, which will be produced in a small series in 2024.

Over the past three years, the French manufacturer also increased its operating results. Last year marked the most successful year in Bugatti’s history. Of the 500 vehicles planned in the Chiron family, more than 460 have been delivered or scheduled for production at the Molsheim Atelier. “Leaving the company is difficult for me, but I am sure that Bugatti will continue to develop and build extraordinary hyper sports cars in years to come. I would like to wish my successor and this outstanding team the best of success for the future,” says Stephan Winkelmann.

Christophe Piochon, previously Managing Director of Production and Logistics at Bugatti, will become Bugatti’s new President. He will join Mate Rimac at the management team of the Bugatti Rimac joint company, as Chief Operating Officer. “I look forward to my new role very much. It shows that we keep our independence and will continue to make the best and most high-quality vehicles in the world at the Molsheim Atelier,” says Piochon.

Hendrik Malinowski, previously Head of Sales and Operation at Bugatti Automobiles S.A.S., is appointed to the company’s management board as Managing Director responsible for Sales and Marketing for Bugatti brand. Larissa Fleischer will become the new Chief Financial Officer in the Bugatti Rimac joint company. To take her new position, she is leaving Porsche AG, where she served as Director of Controlling for Digitalization and the development of new business models. Emilio Scervo will be the new Chief Technology Officer of Bugatti Rimac d.o.o.– he previously held a similar position at McLaren and at Rimac Automobili.

“This joint company is the perfect solution for all parties involved. We have positioned the charismatic traditional Bugatti brand for the future in a way that allows it to continue creating value. Bugatti embodies fascination and passion, while Rimac stands for innovative power and technical competence. Together, they form a powerful automotive company,” says Oliver Blume, Chairman of Porsche AG. “I feel very honored to lead this new joint company as CEO and, no doubt, start a successful, revolutionary and exciting new chapter for everyone involved,” says Mate Rimac. Only about ten years ago, Rimac founded a start-up and, today, is considered a pioneer and expert in electrification. Rimac’s fast-paced work processes and cutting-edge development abilities are the perfect addition to Bugatti’s unprecedented tradition and craftsmanship. “I am very excited to see what impact Bugatti Rimac will have on the industry and how we will develop innovative new hyper sports cars and technologies. It’s hard to find a better combination for new and exciting projects,” says Mate Rimac.

All Bugatti models will continue to be made by hand at the Molsheim Atelier. Therefore, the jobs located there remain secure for the long
term. The Bugatti Rimac joint company will start with 435 employees, of whom 300 will work in Zagreb and 135 in Molsheim (France). In addition, there will be 180 employees from the Wolfsburg development site. Bugatti and Rimac will continue to act as independent brands and retain their production sites in Zagreb and Molsheim, as well as their respective sales channels. As independent brands, they will continue growing with separate and extraordinary vehicles.

“For more than 110 years, Bugatti has been making the most exclusive and high-quality cars in the world,” says Christophe Piochon, president of Bugatti. This goal has not changed and will not change in the future.