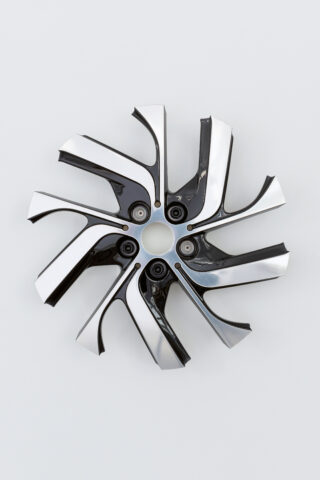 “It’s kind of ridiculous with cars… I mean it’s a stupid concept, you sit in that kind of metal kind of frame, and you’re just driving around, like in a city… and like [suddendly] bump into something… and your perfect curve is like fucked up…” is what essentially sums up Holen’s thought about the automobile. Whether he was referring to car design or to the performance of drivers when talking about the “perfect curve” is something left unanswered. Admittedly, there must be other publications better suited than the present one to come crashing in with such a quote: my sincere apologies for this lapse. But – and I feel obliged to give you advance warning – the worse is yet to come!

Some six years ago, the Kunsthalle Basel hosted an exhibition of Yngve Holen’s work. This was to be my first encounter with the artist’s work. The exhibition was held during Art Basel, namely, in mid-June 2016. The turnout to the exhibition VERTICALSEATS was accordingly high and international throughout the week in question. The title references the concept of low-cost airlines such as Ryanair, namely, that they would in future be providing even less expensive modes of transport in the form of standing seats on the plane. Less space would allow for more passengers to travel at the same time. Thus not only would travel be cheaper, but it would also far better for the environment, at least if we are willing to believe their marketing departments (paper endures even in our so-called “digital modernity”). This somewhat dystopian vision, namely, of the cheap-flights-anywhere-and-everywhere variety, has yet to become reality – thanks, in part, to the current EU safety standards – and is unlikely to become so in the future. But who knows? Many technical transformations have become reality over the last three decades, and in spite of the fact that we have long allocated them to the imaginative works of science fiction authors. Since the nineteenth century – in a nutshell – advances have been geared to the actual needs of people and their pursuit of optimisation. During and concomitant with flourishing industrialisation, this brought its fair share of ills – as far as the environment was concerned, for example – but it was a good thing; an increasing number of machines were developed such as rendered hand-washing virtually obsolete and thus made daily life considerably easier. And yet, for some time now we have been progressively transforming ourselves in a manner analogous to these technologies of our own making. Moreover, though vehemently opposed to surveillance, we are not necessarily adverse to control: we happily key in data on our smartphones all for the sake of the allegedly pleasant life that beckons. Or, at least, so we assume. And with each slice of “freedom”, so the bar of control increases – that of others – over us. 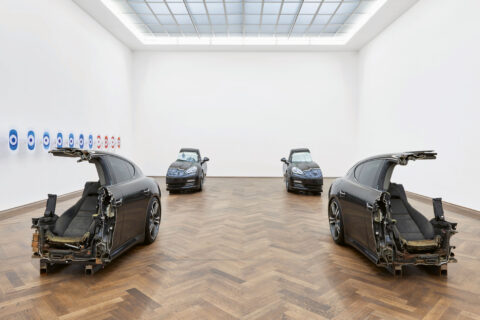 Not entirely of this world, and yet very much a part of it! They “glared” straight into your eyes at the Kunsthalle Basel: those single, dazzling car lights and headlights mounted on the wall at eye level, almost like kinetic sculptures. Luminous, flashing, at times even blazing into one’s face, “cut out” and disconnected from our habitual way of seeing. Almost like organs extracted from an artificial body. An overwhelming spectacle, and yet lacking the hull, namely, the car itself. This medley induces emotional overload, fascination and something akin to fear; a balancing act of attraction and repulsion. Expressed symbolically, is it this “perfect curve”, which, as Yngve notes, “is fucked if you ram into anything”? Quite possibly. At any rate, we should recapitulate this specific “impact”, subject it to further analysis and identify and quantify any potential damage so as to prevent possible trauma.

Once regaining composure in the wake of this singularly unique visual experience, it is just this poignancy that seizes the viewer, and indeed, defines the “genuine” Yngve Holen. All of a sudden, boundaries ceased to be evident; what had been once familiar was, for us, now reduced to a conundrum when beholding the sculptures displayed in the series (title to follow!), whereby our customary habits of seeing and perceiving virtually dissolved tout à coup into nothing. Or at least into a nothing we could classify. A vegetative de-limitation occurred to which we were, and still are, rendered defenceless. Somewhat surreal and bordering on the embarrassing; we cannibalise something that we ourselves, as homo sapiens, have created and that we encounter countless times a day, not least due to the fact that more and more of us now live in cities. And so, cars are simply part and parcel of our lives, dammit! Why, then, this reaction since all we are faced with here are individual car headlights? Leaving to one side the fact that these anthropomorphic “eyes” do, indeed, glare out at us, are perhaps even monitoring us (who says that no camera has been installed?), this experience makes things no easier, but simply more cannibalistic. Furthermore, what sets it apart here is the generic combining with the individual, together with the industrial production of the object in conjunction with the organic; it is thus rendered no less frightening, but also no less fascinating – but neither any less intriguing.

Yngve Holen did after all present it to us in the space to the far rear of the Kunsthalle, that is, an entire car and not merely its headlights. A Porsche Panamera. In its entirety, yet as dissected quartet of more or less evenly sized parts. Cut once horizontally, once vertically, twice transversely. The Panamera, the Pie Chart of our Time? Inoperable, the bolide now stood as four-part sculpture in the space. The vehicle in question represents the Herculean pimp Porsche par excellence; a kick-ass penis enhancer, so to speak, capable of effortlessly (over) gratifying its own clichés – and, in most cases, the shittier the truer – yet no less capable of doubling up as family saloon. It could. Though the fit is somewhat skewered. Even in the case of non-sawed examples. The act of quartering also afforded a glimpse beneath the car’s shell. The protective membrane, the coachwork, was opened as violently as it was marked by enormous precision; and the otherwise potent hp-count within, such as the engine and gearbox, were laid completely bare. Somewhat reminiscent of an archaeologist, it would seem that Holen wishes to convince himself that what the manufacturers promised is actually all there; furthermore, he seems to want to remind future generations of present-day technological achievements. Thus, to decry this work as mere consumer criticism would be far too short-sighted, indeed jejune. Naturally, at this point one might argue, along with Sigmund Freud, that fetishism is rather the operative term here – something which again brings us back to the penis, or else, should one not possess one, envy. So much for Freud’s theory. But this is also what Holen is about, if only marginally.

Today, at the time of writing – 11 March 2022 – marks the final day of Yngve Holen’s exhibition Foreign Object -Debris at the X Museum in Beijing, his first solo-exhibition in Asia, and his twelfth solo show since Basel. (The general consensus: Yes, he is successful.) Regrettably, embarking on a lengthy journey to China before drafting the present text was not feasible. Oddly enough, here again – as in Basel – the exhibition’s title alludes to aviation. Foreign Object Debris, or FOD for short, refers to objects in inappropriate places likely to cause damage. Yngve declines to say whether the choice of title had anything to do with the museum’s geographical location. Yet what remains certain is that FOD could be read as a parenthetic abbreviation for his thoroughgoing artistic research into the “man-machine complex” and the mind-body paradox. Furthermore, for the last two years or so, in addition to countless other subjects and the ongoing development of car parts – the focus meanwhile being less on headlights and rather on the rims of various existent, part imagined cars – heroic supermen also now feature in Holen’s works. Indeed, these appear to wield superhuman powers oscillating as they do between man, machine, reptiloid and serpent. As always, they were produced by means of cutting-edge manufacturing processes. Could it be that such superheroes are actually saving us from these apparently misplaced objects? Or, perhaps even from the consumer world itself or, conversely, are they responsible for such a world and hence for our own ruin? Are we soon to become like them, or more like those half-cows that alternatively adorn the walls as black reliefs or are printed in a photographic fashion to give a fleshy look to the flooring? Are we at all still biometric? And if indeed we are, then perhaps as unprotected game only to serve as easy prey? Are you really that dystopian, Mr. Holen?

Yngve Holen concluded his studies in sculpture at the Städelschule in Frankfurt as Meisterschüler in 2010, early on combining in his art the everyday with the technical-industrial. His work is influenced and inspired by a wide variety of fields; transport, security systems, industrial food technology or, for instance, plastic surgery. The sources are multifarious, convoluted and, not seldom, “geekish.” Yet his works are of concern to us all – including the works themselves – and without intending to be so: for they question not only the appearances of products, but the (intimate) relationships of the human body to these things and to its own subjective perception of the intrinsic and the extrinsic. Holen’s oeuvre encompasses primarily sculptures and research-based publications that probe the substitutability, limitation and complexity of the human body in consumer culture. Holen juxtaposes traditional materials such as metal, marble, glass or wood with state-of-the-art industrial substitutes and technologies, such as carbon fibres, 3D printing or water jet cutting. And, last but not least, he elucidates contemporary engineering by himself becoming an engineer and thus – and thanks to a certain tinkering carried out in collaboration with experts in various other fields – often discovers far better solutions than those all too often served up to us with the promise of salvation. And often without our consent.

Yngve Holen will never be without work. And he is certain to capture our interest by time and again holding up a mirror to us: surely this must be one of the core tasks of art, insofar as one might ascribe such a function to it at all. Yet Yngve’s view of the world is as unrelenting as it is steeped in poetry, implicitly underscoring as it does the explicit in reference to the incessantly evolving social and industrial phenomena of our time. 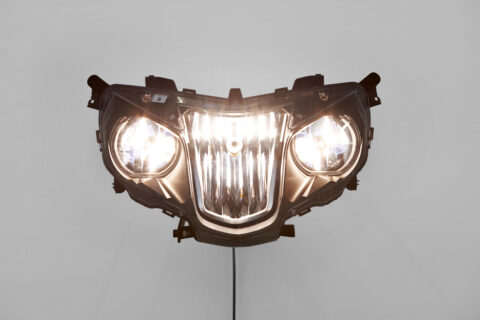