the story of the Cavallino Rampante 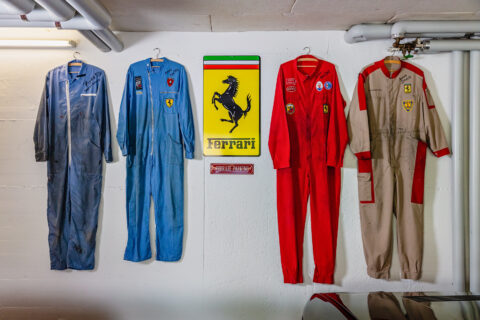 And the Oscar for Lifetime Achievement goes to … Antonio Costantini. That is the thought that hovered in the air during our visit to Antonio’s new workshop. But the space was also filled with countless memorabilia, tools he had made himself, photos, certificates and numerous newspaper articles from his time as one of the best and most famous Ferrari restorers in Switzerland. He had to close his former workshop, on Badenerstrasse since 1989, because the building was demolished. However, Antonio cannot stop completely, from one day to the next, just like that. Repairing vintage Ferrari, Lamborghini and Maserati cars was and still is his lifelong passion. This is why he has set up a new, small workshop – a place for close friends to meet and for vivid memories – because Antonio is bubbling over with knowledge, passion and stories, and his 80 years are not slowing him down at all!

Even as a child, Antonio preferred to work on cars with his hands rather than continue going to school, contrary to his father’s wishes. His mother supported him and helped him to get hired at the workshop at the age of 14. He passed his aptitude test with the owner of the workshop because he showed total commitment to the job when cleaning tools – and practically stuck his head into the diesel engine. The owner was picky, because at that time, there were already many good mechanics in the village. But Antonio’s commitment and enthusiasm prevailed, not to mention the litres of olive oil his mother gave to the owner, and he was hired as an apprentice. In the process, Antonio learned not only how to do the actual repairs, but also how to make his own tools, paying attention to the smallest details. Back then, he was not paid for his work, because it was believed at the time that anyone who had the chance to learn a trade should consider himself lucky. 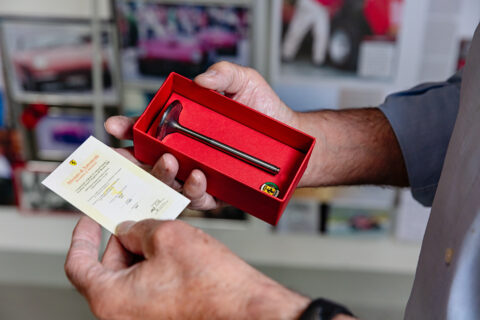 He knew Ferruccio Lamborghini and Enzo Ferrari personally. At the age of 20, Antonio wanted to earn money and, encouraged by a friend, left for Switzerland. That friend had raved about how, on the one hand, people were paid there by the hour and, on the other hand, that you could take a girl out on a date without bringing along the entire family as chaperones. Antonio wanted to find out for himself, left his mother and siblings and set off for Switzerland in 1960. After a brief interlude in Toggenburg in a textile factory, he tried to find work in Zurich. His German was poor, and he did not have any diploma either. However, as it turned out, he got a chance to demonstrate the skills he had learned during his apprenticeship in Italy. He liked the Swiss mentality very much because everything had to be done neatly and precisely. Antonio still feels that way today: “You find the best mechanics in Switzerland.” He honed his skills as a car mechanic and eventually met Margret, whose first car he fixed. In return for the work done, he asked her to have dinner with him. The two have been an unbeatable team since 1966. It was also Margret who supported him in his ambition to work for Lamborghini. She personally called Karl Foitek, the importer of Lamborghini at the time and later also Ferrari, and thus paved the way for Antonio’s “test preparations” in his garage. Karl Foitek was immediately won over and recognised the enormous potential. Antonio continued to broaden his experience through courses in Sant’Agata Bolognese, where he received his diploma – personally signed by Ferruccio Lamborghini because, to the latter’s amazement, he was able to adjust the carburettors of a Miura purely by ear – and later at Ferrari headquarters in Modena. 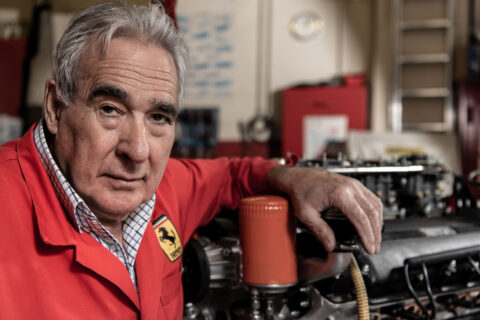 Wealthy and discriminating customers. From the very beginning, Antonio was supported by fastidious customers who asked him to take care of their cars. His mechanical skills and professional reliability stood out well above the rest. In 1989, he felt ready to set up his own restoration workshop. Their two children, Renato and Sandra, were already older by this time, so Margret agreed to support his decision. And she did go all out: she took care of correspondence, procured spare parts (which were always paid directly in cash) and handled customer relations. Soon word got around about the good work Antonio was doing in his garage. One of his unique selling points was his uncompromising approach to restoration: Antonio always believed in restoring the original condition with original parts. There was no room for shortcuts or cheaper options. Antonio, in turn, only accepted customers who also appreciated this work and philosophy, and very soon he was in a position that allowed him to choose his customers. They included many well-known national and international collectors. Over the years, close relationships and friendships developed, a fact Antonio has documented in a large number of photos. However, he did not agree to work on any of the new supercars. His limit had been reached with the Ferrari F40 due to the increasing amount of electronics involved. Precision for mechanical masterpieces. He was just as precise in his approach to restorations – he only took on two to three restoration projects a year. Always ensuring quality at the highest level was a matter close to his heart. His experience allows him to solve many problems – problems that others usually give up on. This has often gained him the loyalty and admiration of customers. He is not the only famous restorer in Switzerland who knows these historic Italian sports cars so well, but hardly anyone can boast of such good relations (with the parent companies of Ferrari and Lamborghini, but also with excellent auto body repair technicians, body painters, car electricians and upholsterers) as he does. He has worked on many prestigious cars over the years. Among them, the Ferrari 250 GTO chassis 4153 GT, which sold for 70 million dollars, the Ferrari 166 Spider Vignale and Ferrari 250 MM, followed by the Ferrari 500 Superfast, 400 Superamerica, 212 Barchetta, 250 Tour de France, 250 Spider California, 250 SWB, 512 BB LM, etc. The most prestigious of all, however, is still the Ferrari 500 F2, with which Alberto Ascari won the first two Formula 1 World Championship titles for Ferrari in 1952 and 1953, and thanks to which Antonio was admitted to the Club Meccanici Anziani F1, a recognition that is very rarely granted and one that makes him understandably very proud.

We toast Maestro Antonio and his dear wife, Margret, their extraordinary creativity and their impressive life’s work. We are happy to take with us one tradition that is thought to bring good luck, which we learned about here: the first sip of Prosecco goes into the radiator and the cork under the steering wheel. Here’s to a safe journey! 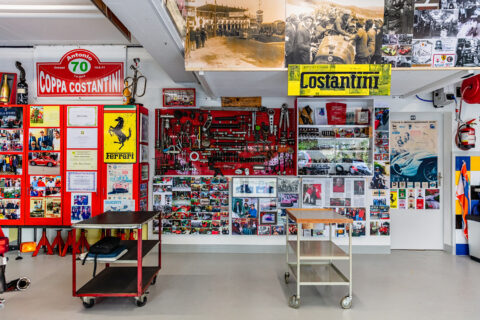