CLOSE
Back to overview 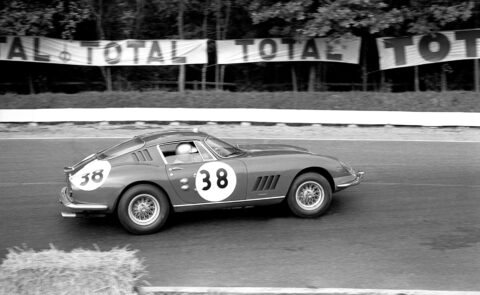 Released in 1964, the Ferrari 275 GTB followed on from the 250, which took ten years to build. Designed by Pininfarina once again, the sheet metal body was a development that had consistently moved with the times, and the construction with independent rear suspension and the transaxle design (engine at the front, gears on the rear axle) was quite modern. However, the design incorporated the Colombo V12 engine, which had already been in use at Ferrari for almost 30 years. At 3286 cc and 280 to 320 PS, this power train originally designed for a cylinder volume of 1.5 litres had reached the pinnacle of its development. Up until 1968, around 800 275 GTB cars were produced. Although the factory never used it for motorsport, it was driven by several private teams including the Americans from NART, the Maranello Concessionaires from England and the Swiss Scuderia Filipinetti team, producing very respectable results in the USA and Le Mans.

The 275 GTB with the model extension C, for Competizione, was a strong competitor. Road Ferraris were usually made of steel, but in 1965, four models with a super-light aluminium body were released, followed by 12 more the following year. Various magnesium components and Plexiglas side windows helped to reduce the car’s weight to 150 kg. The only disadvantage was in terms of robustness: the body’s thin aluminium panels dented easily.

More serious was the fact that the wheels broke due to the stress endured on the racetrack. This meant that the 275 GTB became the last Ferrari to be produced with the beautiful classic spoked wheels.