Perfection
to the Enth Degree


Robbe & Berking have been crafting silver into objects of art that have brought a shine to dining halls, restaurants and yachts throughout the world for almost 150 years. The second mainstay of this north German company is it’s lovingly restored or replicated yachts. To better understand the inspiration behind this fascination for silver and wood, we met with the company’s CEO, Oliver Berking, in Flensburg. 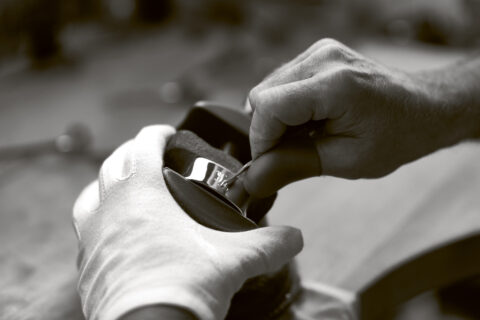 Whether talking of silver spoons or wooden boats, for Oliver Berking they are both are lived passions and man-made works of art that make the world of Robbe & Berking resonate. While exuding tremendous vigour and tenacity, Berking’s entrepreneurial talent is rooted in an instinctive sensibility. Coupled with his flair for establishing networks and inspiring enthusiasm, is his success at evoking bygone eras. What’s more, Robbe & Berking is living testimony to the fact that unique, handcrafted luxury products of the highest quality can, and still should, be produced in Germany. This is true both of the silver manufactory, the world’s market leader in silverware, and of the Classic shipyard, regarded as the absolute ne-plus-ultra of wooden yachts of the 12mR size class.

Robbe & Berking owes its leading status on the world market to a maxim coined by Oliver Berking’s great-great-grandfather: “Others may be less expensive, but none are superior to ours.” Now in its fifth generation, this Flensburg-based family business is currently headed by Oliver Berking. He has been steadily expanding the manufactory since he took the helm in 1985, ensuring that all steps of the production process are performed exclusively in the company’s own workshops. “Today, we are by far the largest manufacturer of silver cutlery in the world – and with only 150 employees.”

HE LONGEVITY OF TRADITION OVER-SHORT-TERM TRENDS
Eighty years ago there were still three manufacturers in northern Germany alone, explains Oliver Berking during our tour of the production facility in Flensburg, which became operational in 1874. Some 20 tonnes of silver are manufactured here each year for the various collections, which include a total of 4,000 different items. Robbe & Berking lists 30 different silver and silver-plated cutlery designs, each comprising 50 individual pieces, from oyster forks to sugar tongs. Fifty steps comprise the production process – involving cutting, grinding, polishing and two quality controls – before the finished spoon is available for sale. Candelabras and a host of other superb table accessories are also manufactured, thus complementing the consummate table service.

The more than 2000 master moulds used to make the steel -cutting and embossing tools for the range of cutlery patterns are meticulously handcrafted and stored in the workshop’s “Fort Knox.” Since 1991, Robbe & Berking has been issuing a repurchase guarantee, which ensures that all silver and silver-plated supplements can be repurchased at least until the year 2040. This longevity is the hallmark of success, in that only the most exquisite patterns and designs are manufactured. As Berking points out, the company has no compunction about refraining from following trends, but rather designs collections guaranteed to endure for generations to come. This emphasis on continuity is perceived as being espe-cially important among those who appreciate tradition and value, both private customers and collectors, but no less so hotels and restaurants, which rely on consistency and elegance.

“JUST DON’T START SPECULATING!”
The discretely stamped silver seal on the reverse side of the silverware not only indicates the items’ origin – the former imperial crown symbolising Germany, the crescent moon -indicating silver – but is also the mark of refinement: in other words, whether the cutlery is silver or silver-plated. The difference between 925-sterling silver – pure silver being too soft and the low copper component providing stability – and silver-plated cutlery, is that it translates into a price roughly four times greater. Moreover, silver is a commodity traded on the stock exchange the price of which is subject to constant fluctuation. Oliver Berking adheres to his father’s advice, who once enjoined: “Just don’t start speculating!” Berking determines the timing of his silver orders – purchasing exclusively from German suppliers – on the basis of years of experience and intuition. Moreover, he keeps a vigilant eye on stock-market fluctuations and liaises with the production department.

Silverware does not constitute a financial investment, yet -Robbe & Berking has been offering purchasing and selling services for gold and silver bars as well as coins since 2009. Sales values are regularly indexed to current values in international gold and silver markets. The almost 150 years’ experience in the precious metals business in conjunction with the sales network comprising eleven branches in major German cities, all testifies to being more than a considerable advantage. This signals that the luxury brand remains committed to its customers and is on course for lasting success.

PARTNERSHIPS & INNOVATIONS
Well over half of the world’s 200 largest yachts are outfitted with Robbe & Berking silverwork. Taken together, the restaurants which rely on the manufactory’s range of products represent hundreds of Michelin stars. Similarly, numerous luxury and first class car brands maintain relationships of outstanding cooperation with Robbe & Berking. One such brand is BMW, which has achieved a masterpiece of craftsmanship for its BMW Individual in the BMW 7 Series. Over ten kilograms of sterling silver were “bespoke-fitted” for the interior and exterior trimmings, as witnessed in the hammer-finished Martelé door handles or the enamelled BMW emblem.

“I am more at ease today than I have felt in a long while in the field of product development,” says Oliver Berking as we pass his most recent masterpiece, one of his workshop’s,  mahogany-fashioned bar trollies. This wonderful design is a veritable feast for the eyes, which, thanks to the silver bar collection that features everything from champagne glasses to whisky tumblers, is a finely styled augmentation for both private residences and business premises. The cutlery box for the conveyance of silver cutlery from the cabinet to the dining table has similarly proven a great success. Berking remarks that the company plans to continue conquering the world, including the Chinese market. At the same time, the company is currently developing a new web shop accessible anytime and anywhere.

AN IMPOSSIBLE MISSION
Together with Oliver Berking, we now find ourselves inside the shipyard building at Flensburg’s city harbour, which he acquired in 2008 – albeit without a business plan. Berking’s second passion, wooden sailing yachts, has its roots in the restoration of the “Sphinx.” The classic 12mR regatta yacht, originally built in 1939 as a flagship for the Norddeutscher Regatta Verein NRV, one of Germany’s foremost sailing clubs, was a major success. She was subsequently in service for 50 years with the German armed forces as a training vessel for naval officer cadets.

The “Sphinx” was listed for sale in 2005. Together with two of his partners, Oliver Berking resolved to prevent the boat from leaving the Flensburg fjord: Submitting a joint bid, the partners ultimately won the auction. From 2006 to 2008, Berking and his specialist staff undertook a thoroughgoing restoration based on the shipyard’s original specifications. At the time, very few believed the undertaking would prove successful. “The members of the restoration outfit were dismissed as a bunch of lunatics who would wreck the vessel”, Berking recounts through a beaming smile. By endeavouring to retain the knowledge acquired during the restoration, Berking and his team laid the foundation stone for constructing the wharf. They have been restoring classic motor and sailing yachts, along with replicas of exceptionally fine, long-lost classics ever since. More recent constructions are also replicated with loving attention to detail and tremendous élan. Whether using original or recent plans, traditional or contemporary construction methods, they are always made of wood and handcrafted. 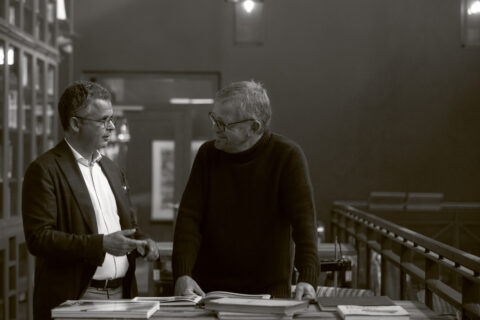 FLENSBURG’S EXPERTISE
“Researching lost yachts and their original construction plans are among our most important vital tasks,” explains Oliver Berking. Thus, several famous racing yachts in the 6- or 12-metre class have already been rescued, namely, restored or replicated. Among them is the final design of legendary Norwegian yacht builder and Olympic sailing champion, Johan Anker, which was finally completed in the shipyard following a 76-year hiatus. None other than the Norwegian King Harald V appeared in Flensburg for the laying of the keel in 2015.

“We have yet to make a profit from the new construction projects,” Oliver Berking reports. “Our library houses millions of pages of plans and information, which facilitates defining the construction with the client, clarifying legal aspects and making estimates to the best of my knowledge and conscience. In the final analysis, there is invariably far more involved. And yet there is a world market for this small but vibrant demand for exclusive, first-class and newly manufactured or restored collector’s pieces. The experience of the silver manufactory bears testimony to this. Ultimately, I envision further establishing Flensburg as a centre of excellence for classic yacht construction.”

Meanwhile, Berking’s zeal for classic racing yachts attracts an influx of around 100,000 visitors to his premises each year. Since 1995, the company has also hosted the Robbe & Berking Sterling Cup, an annual classic regatta on the Flensburg fjord held in cooperation with the Flensburg Sailing Club. In 2019, Oliver Berking even managed to host the “Induction Ceremony” of the legendary America’s Cup Hall of Fame in his Flensburg shipyard. Since 1992, over 80 Cup legends have been inducted into this select circle; with all but a few exceptions, the induction ceremony has always been held in the USA. Guests from around the world flocked to the premises of the Robbe & Berking Yachting Heritage Center and brought major international publicity to the Flensburg shipyard.

WINTER GUESTS WITH A SHARED HISTORY
In the shipyard’s winter depot can be found legendary yachts by renowned owners and builders, some of which have close ties due to special events, such as “VIM” and “Gretel”, notes Berking. VIM was commissioned in 1939 by US entrepreneur Harold Vanderbilt at the New York shipyard Olin Stephens, and had already then distinguished herself by virtue of her state-of-the-art design. The yacht achieved countless regatta successes, which have endured to this day. Among other things, VIM won the twelve-metre class of the Robbe & Berking Sterling Cup 2021.

The Australian yacht Gretel, the design of which was based on VIM, was built 23 years later by designer Alan Payne as a challenger for the 1962 America’s Cup. The teams of the two yachts trained together in preparation for the Cup; ultimately, the Americans won the day. In the years that followed, the super-fast “Gretel” likewise served as a sparring partner for several other teams, later being sold in Europe where she continued to sail for many years in Italy. She was discovered in Italy by the Robbe & Berking Classics yacht yard, where she has since berthed at the Flensburg shipyard. “Our aim is to restore the ship to her original condition of 1962,” explains Oliver Berking. “The Gretel is a unique specimen in yachting history and must be preserved by all means.”

THE ALLURE OF VANISHING TRADES
Robbe & Berking Classics is more than a shipyard; it is also museum, library, restaurant, yacht broker, and small publishing house. With all these attractions, Berking welcomes guests to embark on a journey to Flensburg and experience the glamour of life in, on and around the water. Here, too, everything is pure passion, from the detailed historical fittings to the most important international collection of antiquarian yachting literature housing some 9600 works. The perfect experience is completed by dining at the Italian restaurant.

At our final lunch together, Oliver Berking’s pioneering fervour and boundless passion reveal themselves once again. “So, this is what runs through the story of my life: both are trades that show that what I feel passionate about actually no longer exists. There is no real need for a wooden boat or a silver spoon, these are simply luxury items. We represent what people would commonly associate with the good old days. The world is changing and yet times of crisis have invariably afforded ample food for thought.” 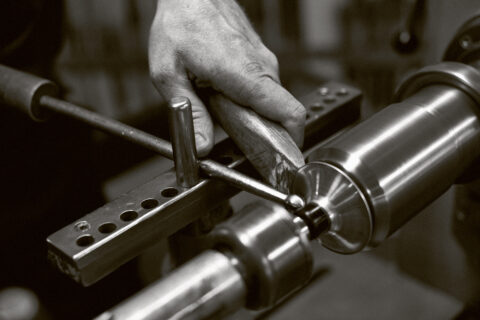