The Drummer
at the Gates
of Le Mans


All rock bands need an anchor of calm. In the case of that explosive, experimental, visionary and, above all, cerebral rock group Pink Floyd, such an anchor was the group’s drummer Nick Mason. But even the most mellowed of dispositions will now and then break with character and come roaring out of the blocks and onto the track for some serious, preferably loud and feral, rocking performance of some vintage treasures. 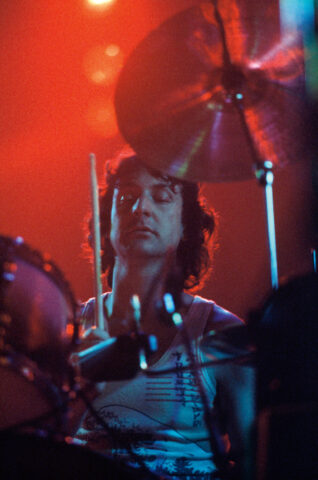 The producers of music journals – wherever they are in the world – are a rare breed. Their propensity to rank music in lists verges on the obsessive. Nick Hornby’s book “High -Fidelity”, later adapted as a film starring John Cusack, is a case in point. Whatever else may be said, there is one steadfast feature in these decades-long best-of lists: Pink Floyd’s seventh studio album “Wish You Were Here” released in 1975, undoubtedly occupies a place in the top one-hundred “all-time greats”, albeit that the pundits subtly lambast it in critical reviews. The reason is quite trivial: great success is to the list-writers of the world with the entire canon of pop music at their disposal, an accolade they find almost unforgivable. But in doing so, they overlook a great deal, such as the complexity of Storm Thorgerson’s original four-layered LP cover depicting the iconic photo of the handshake of a flaming man; or gems that would only later unfold their magic, such as the oppressive “Welcome to the Machine.” That said, a tree couldn’t give two hoots when dogs bark at it: Having sold 20 million records, the band members certainly had more than a little to spare during those halcyon days of the music business.

A BAND WITH ATTITUDE
For anyone who does not have the encyclopaedic details of Pink Floyd history at their fingertips, the essential thing to note is the four individuals, who made up the core of band (the fifth member was Richard Wright). The first to mention is lead singer and guitarist Syd Barrett. As brilliant as he was, he was sadly ousted early on in the band’s career following excessive drug abuse. Then there were the two feuding heads on mic and strings, David Gilmour and Roger Waters, whose rivalry for number-one position following Barrett’s departure, while fuelling the band’s work over many years, ultimately culminated in a bitter and irreparable schism. And finally, there was the man behind the wheel, Nick Mason, who set the pace and otherwise held his peace. Mason was to the Floyd what Charlie Watts was to the Stones. The tenor between the two groups was one of mutual respect, though the Stones would ceaselessly lay it on thick about their quasi-proletarian roots, and the Floyd never managed purge from themselves the odour from the halls of higher learning and concomitant class ethos from which they hailed.

THE COLLECTION GROWS
In the wake of the epochal commercial success of “Wish you were here”, Nick Mason wisely elected to plough part of his royalties into a series of hijinks. Being the son of a documentary filmmaker and himself a student of architecture, he had always coveted fine cars. The time was ripe to commit the staggering sum of £37,000 to an early 1960s Ferrari 250 GTO, the equivalent of three Porsche 928s, which debuted the same year. But who walked away from three Porsches in favour of a vintage Ferrari? None other than Nick Mason; and his steering clear of the new models was arguably the best financial decision of his life. By 2018, a Ferrari 250 GTO auctioned for $48.5 million, in short, the equivalent of 250 handsomely kitted-out Porsche Panameras.

But, doubtless, Nick Mason couldn’t have cared less for them. His garage is well-stocked, above all, with racing cars. Whenever so inclined, he can take a morning drive to the recording studio in a Ferrari F40, or an extremely rare McLaren F1 GTR – the previous owner being none other than former founder of McLaren Ron Dennis – or else in one of his many Maseratis, Bugattis, or Jaguars.

RACER AT HEART
A motoric genius on drums, Nick Mason was no less so on the racetrack. From 1979 to 1984, he competed each year at the Le Mans 24 Hours while recording the legendary albums “The Wall” and “The Final Cut”. Far greater than the results (two withdrawals, one disqualification, 18th place as best result in overall ranking) are those wild, dangerous and downright legendary cars in which Mason, having since been knighted, was to compete: the Porsche 956, BMW M1, March and Lola prototypes. The seed had already been sown by his father Bill, who in 1952 produced a documentary film on the legendary race along the Sarthe. “I longed to compete at Le Mans ever since I was a schoolboy”, commented the future father-in-law of racing driver Marino Franchitti. Catching his breath after his first start, he remarks “I never anticipated crossing the Atlantic in a rowing boat. But there it is.” Pink Floyd finally disbanded in 2015. Mason still delights in his vintage cars. In 2017, at the age of 73, he rammed his £3 million McLaren F1 GTR – one of a total of nine 1996 chassis 10Rs – into the guardrails at Goodwood. The good news is that this jewel of a car was repairable. It has ever since been the anchor of calm in Mason’s private garage in south England. 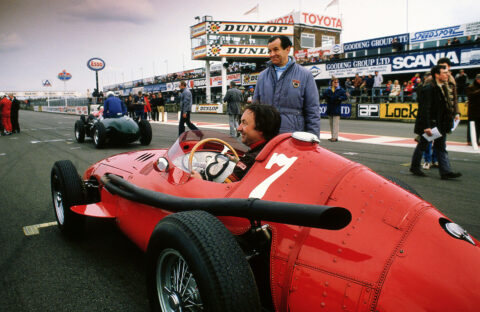